At the weekend, watching a movie with your fiancé feels incomplete without having Popcorns in your lap. It is also sure for popcorns to be spread here and there during the high and tense moments of a movie. But the problem arises when you wake up in the morning and see your dog eating the popcorn from the floor. It makes you feel worried about that can dogs eat popcorn? Are popcorns good for dogs and is it good eating the popcorns? The answer to this question is Yes and No.

Yes, if the popcorns are plain air-popped, and No if the popcorns are topped with sugar, salts, butter oil, and other toppings and seasonings. It contributes 3.5 kcal (calories) per gram to the food of your furkid. It must be kept in mind that it should not be rendered on a daily basis rather be given occasionally. It contains Zinc, Magnesium, Fibre, Manganese, Iron, B vitamins and trace amounts of minerals. It is also fat-free and cholesterol free. Nutrients like riboflavin and thiamine are also present in popcorns. 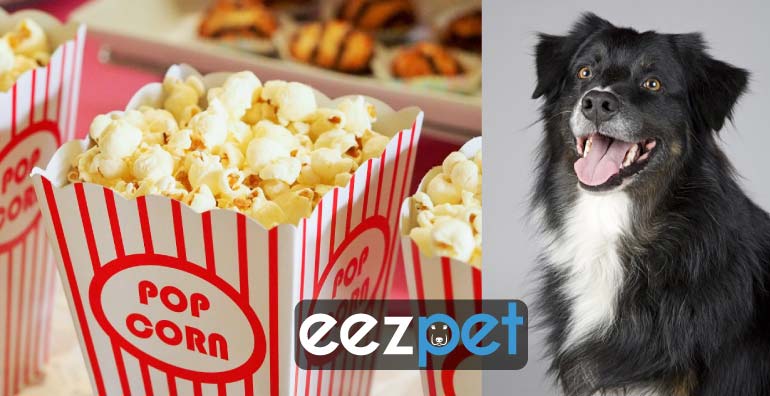 According to Dr. Danielle Bernal, a veterinarian with Wellness Natural Food, a pet should always be avoided giving popcorns because of the issues of allergies caused by popcorns in dogs_ if not in most of them, as a precaution: though he has not elaborated on to which type of popcorns it should be. He also advised to not give your dog the popcorn kernel as it would cause digestive issues because of its hard shell which is not easy to digest.

Every food, its types and its time to serve has negative as well as positive effects. Popcorn is not a new thing for dogs but its servings, types, and occasions make it good or bad for your dog.

Popcorns, if served without seasoning, having no kernel and not more than often, have no side effects. But it can prove hazardous if topped with sugar, salt, artificial flavors, and toppings. If given more than 10% of your dog’s daily intake on a daily basis, your dog is going to face the music.

If popcorn is topped with sugar, your dog for sure will have teeth cavities. If salted popcorns are served to your furkid, you must expect dehydration, dizziness, and irritation in your dog’s behavioral approach. The presence of salt also a lead to kidney failure since the kidney works very hard to get rid of the excessive water accumulates in the body following the intake of salt: be it human beings or your dog. Your dog will also go through the stages of drooling, digestive issues, diarrhea and chronic gas issues. Inactivity will also seize your dog. The usual inertia and laziness of mind will become part of his nature over the time if you constantly expose your dog to topped and seasoned popcorns as not a part of a treat but a large part of his daily food.

But the long term setback of the sugared and flavored popcorn is obesity: the root cause of all disease in human beings as well as dogs. The BMC veterinary research study of 2012 reads that obesity in dogs can cause insulin resistance (diabetes), dyslipidemia (high cholesterol) and hypertension (high blood pressure). Also, the 2016 BMV veterinary research study shows that obese dogs are more prone to metabolic disturbances.

Popcorn is not substituted for your dog natural food. It leaves him deprived and stunted if given in large amount and on a daily basis. The United States Food and Drug Administration (FDA) acknowledged that studies have shown that microwaved popcorn can cause cancer because of the presence of detrimental chemical compounds in the coating of bags popcorns are bagged in..

With some precautions, mentioned above, the right amount of popcorns and their serving time, popcorns can benefit dogs_ though to a little extent.

Riboflavin and thiamine are very good for your dog’s vision. Calcium and magnesium are good for your dog’s bone development. Older dogs will be thankful to you since their bones are brittle and fragile because of age. To function perfectly, your dog will need potassium and zinc, which are present in popcorns. Copper assists your dog to digest iron in a quick way. They will not thus become anemic.

But it must be kept in mind that popcorns are used to treat food and on rare occasions. It cannot be given to dogs daily and more than often otherwise they_ your dogs will have to face the consequences of eating popcorn loaded with sugar, salt, and other toppings. Plain air-popped, if not hazardous, but it cannot add any nutritional value to your dog’s food. So there are other alternatives which you can give to your dog to keep him strong and healthy.

It is also to be kept in mind that popcorns whenever are given best be cooked at home. For this, you must know the recipe and its cooking procedure. Air-popped popcorns are very easy to be cooked. A pan and a stove are all you needed. After popping popcorns, the kernel must be removed to prevent the crushing of your canine’s teeth and possible choking

Dogs should not eat cheese popcorns though on very rare occasions can be given. The lactose intolerant dogs_ which most dogs are, will not be able to escape the issues of diarrhea, vomiting and drooling if given in large amount. Also, it’s more than often exposure to dogs can lead to obesity, hypertension and kidney issues since cheese contains a high amount of sugar, salt, whey and vegetable oil in it. Additional some types of cheese also contain garlic powder and onion powder which is very dangerous for dogs and can lead to severe consequences.

When it comes to slat in popcorns, it should not be given to dogs if you want your dog not to become thirsty and ready to go for urination time and again. Salt intake in large amount can lead to sodium ion poisoning or salt toxicity according to the Merck Veterinary Manual.

Popcorn kernels are found usually in raw and hard form and if given to dogs in the mentioned form, it can lead to crushing teeth and in long term severe cavities since it tends to stick in between your canine’s teeth. The kernel is the main thing which differentiates simple air popped popcorn from popcorn kernels.

On rare occasions and a birthday treat or as treat following completion of a task, peanut butter popcorns can be given to dogs. It must not be made part of a dog’s food and it is not equivalent to the nutritional value of a dog usual food like meat. It must, of course, below in sugar and salt otherwise you will find your dog in bad condition: sooner or later. It would be wise to make it at home since diary peanut butter always contains hidden sugar and salt.

Mix one cup of popcorn with one cup of peanut butter very low at salt and sugar and it must not contain Xylitol: virgin oil must be added to make it savory and attractive for your dog. Then form small balls of while placing it on baking paper and leave them to set.

Popcorn, if served in a plain manner and on rare occasions are not that harmful but it cannot serve the purpose played by regular food of dogs. Some other foods are better alternatives to popcorns for dogs.

Apple, Banana, Carrot, blueberries, Brussels sprouts, Pum and Green Bean would be a better choice for your dog. Bake them for two hours at 250 Fahrenheit.

Popcorns are not a substitute for your dog’s natural and usual food like meat and other food. It does contain some nutrients like zinc, magnesium, manganese, phosphorous, fiber, a trace amount of vitamins, B vitamin, and iron but it cannot fulfill the bodily requirements of a dog. The popcorns should also be given when they are plain air popped and devoid of a hard shell. You must monitor your dog after rendering him popcorns as a treat because some dogs are more allergic than others to popcorns and they develop the symptoms of an allergic more rapidly than others. In case of an emergency contact forthwith a veterinarian.

Emma Jones is a graduate in Zoology. She has extensive knowledge and capability of writing about Pets. She shares her knowledge about Pets through eezpet.

eezpet has all the trusted and detailed information about Pets for Pet lovers and Owners.

All the information on this website publishes in good faith, and for general information purpose only. Any action you take upon the information you find on eezpet.com is strictly at your own risk. eezpet.com will not be liable for any losses and damages in connection with the use of our site.